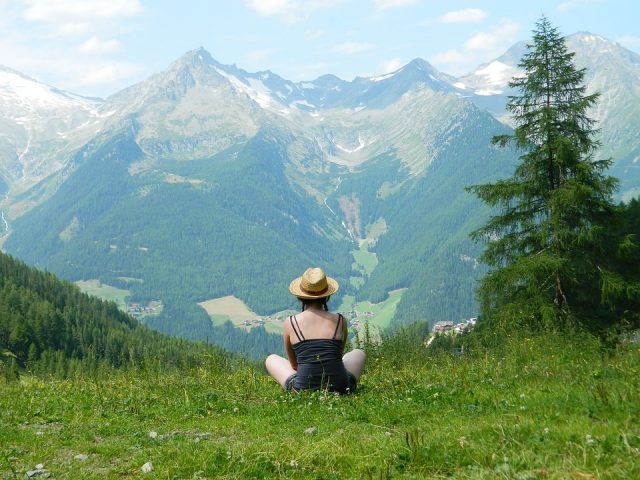 For a long time, I felt lost. I was stuck at a dead-end job and no matter how much money I was making I never felt satisfied. I was going through the motions anyway, punching the clock and feeling my life slipping away from me.

Then my partner gave me some bad news: he had found someone else and was calling it quits. I was devastated. I had really wanted everything to work out and we’d made plans for the future, and were thinking of getting a house someday.

The breakup determined me to take action. There must be a bigger world out there, something more interesting I could do with my time. I didn’t want to be someone who had no great stories of adventure to tell in their old age. I wasn’t going to be a person who did nothing but serve their time in the corporate world with nothing more to show for it than a watch at the end. Sure, the money was good, but what’s that old saying? You can’t take it with you.

So, after my break-up, I embarked on an expedition. I was not just going to see the places on the tourist trail, I was going to visit more obscure destinations around the world. I had saved up money so I was able to afford it.. and why pay for a comfortable vacation like a cruise where you’re bundled on and off the ship in luxury? That wouldn’t take me outside of my comfort zone at all, so I decided that I was going hiking in some of the less travelled places. As Mark Twain famously said, it was time to throw off the bow lines and discover something about myself.

One of my great dreams was visiting Petra in Jordan. Ever since I saw it on Indiana Jones and the Last Crusade, it held special interest for me. I found myself standing in front of this world wonder after traveling through the canyon of Al Siq, marveling at the beauty of this long-gone civilization. I felt like a real adventurer as I explored the area and counted myself very lucky to be among the privileged few to visit this wonderful place.

Petra captured my heart, but I was on a mission. I wanted to continue to enrich my life with these experiences and by this point it was safe to say I’d caught the travel bug. Now I was off to experience life in what I heard was the happiest nation on earth, Bhutan. This tiny country in the Himalayas is a place out of time, lost in our modern world. The people were the most amazing part of the experience. Their traditions are very important to them and visiting Bhutan is one of the most humbling experiences in my life. The dust from my boots was not yet settled before I had decided on my next destination: a physical challenge and a spiritual one.

Tibet has a long and difficult history. Its past with China is still a living entity among the people there. Tibet was also one of the least expensive destinations on my itinerary and I was pleasantly surprised to find that it cost less than ten dollars per day to eat in Lhasa. I wanted to know more about the spiritual history of the country as the home of the Dalai Lama and the location of several stunning monasteries. Tibet is one of the most fascinating nations I visited and by this point in my trip the pain of the breakup and the memory of my life as a corporate drone had all but faded into memory. I was beginning to think I could spend a lifetime like this, going from place to place and learning everything I could about the world, absorbing the environment around me.

I decided it was time to move on again when the weather got colder. Bali had always appealed to me and after the austerity I had experienced in Bhutan and Tibet, the appeal of a tropical destination could not be understated as the chill in the air reminded me it was time to leave. I said my farewells to new friends and promised to return one day, and boarded a flight to the beautiful tropical islands of Indonesia.

Bali is gorgeous. The sunsets are postcard-perfect and towering clouds cast in purple as the evening turns to night continued to impress me every time. The island is a combination of contrasts, from the high-end hotels catering to tourists to the thick jungles of the island interior. As I said, I wasn’t looking for a luxury experience and wanted to hike in different challenging areas of the world. Still, I am only human, and did partake in a few tropical cocktails more out of tradition than anything else.

I spent some time in a small rented hut on the island, hiking through the rainforest and using a scooter to get around for necessities. Although Bali is more Westernized than some of the other nations I visited, it presents its own set of problems. The issue with rainforests is that they are extremely damp, which can make hiking unpleasant if not downright uncomfortable. There are also critters to deal with, from large snakes to spiders, whether you are on the trail or not. One day I found a python curled up in my bathroom! The snakes in Bali are no joke; the King Cobra is the most dangerous of all of them so it’s very important to watch where you step.

It was difficult to leave the beaches of Bali and the surprising wildlife behind, mostly because I enjoyed the experience of life in the tropics and interacting with the Balinese people. It was also a fairly cheap destination and I was quickly discovering that the most expensive part of traveling was the plane trip from place to place when it came to most of Asia. I felt that I had explored this region enough and I wanted to continue to challenge myself in a different destination.

Somalia wouldn’t be the first place on many people’s travel wish lists. It has experienced a lot of problems recently and the poverty that is evident there can be difficult for people to handle. It was not easy for me. After leaving Bali and thinking I had already experienced some of the poorer parts of the world, its relative luxury in comparison to Somalia hit hard. I recognized not only that I live a life of incredible privilege because of where I was born, which is a stroke of luck for any of us, but also that my own problems were very minimal in comparison to what these people were facing every day. This sounds like I am making my trip about my interaction with the suffering of other people, but that wasn’t what startled me out of the doldrums that had pursued me throughout my adventure. It was that they were still happy and welcoming, treating me with respect and kindness even though I was clearly an outsider. Despite their problems, they were able to see beyond them to the reality that life is short and we should find enjoyment in each other’s company. They seemed to say, be thankful for what you have, because it is an awful lot.

After Somalia, I decided to switch things up again and headed to Scotland. I was tired of warm weather and had also become a little fatigued with the poverty and suffering I had seen even though I understood that this was daily life for many people around the world. Armed with this knowledge, I arrived in the Highlands and checked into the little hotel above the pub where a Border collie sat snoozing by the fire. After my previous experiences, Scotland seemed very quiet and cozy.

The pub provided me a place to discuss my travels with fellow visitors over excellent single-malt Scotch. I planned my hikes for various mountains and munros, but found that I spent most of the time thinking over what I’d seen and the people I’d met while traveling. Many of these were solo hikes where I was surrounded by the stern and sublime mountains of the Scottish Highlands, which encourage introspection and consideration. I thought about everything I had seen and everyone I had met, including my companions in the pub that evening. I thought of the numerous hikes I had taken and the new vistas that revealed themselves to my curious eyes, just like travelers before me throughout time. I realized that travel does more than just expand our own horizons, it takes our former prejudices and destroys them. It teaches us about our place in the world, our place in society, how to interact with other people and how to appreciate everything we have, however little that may seem. Friendship is more valuable than anything, and I still correspond with many of the people I met on my long journey around the world that started with a broken heart.

When I left Scotland, my heart had healed. Whether it was because I was able to share my experiences or because of the experiences themselves, I found that wearing out your hiking boots on a lengthy outdoor adventure, is one of the best ways of getting over a bad relationship. It’s also one of the best ways to realize there’s an awfully larage amount of fish in the sea, out there… waiting for you to discover them. If you’re in the same position I was in at that point, my best advice to you will echo Mr. Twain’s: Explore. Dream. Discover.