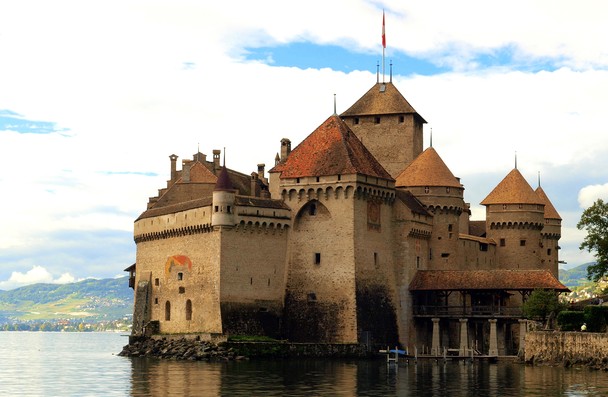 Switzerland’s castles, yes there are about 600 of them.

Come to Switzerland and experience the air, so fresh and pure. Take advantage of the many wonderful and interesting walks and hikes. Switzerland’s castles are just waiting for your visit. I would recommend that you include one of them in your itinerary and guarantee that you won’t regret it. You will easily find an itinerary that will allow you to experience their beautiful natural surroundings added to a visit to one or more of their historical landmarks.

Switzerland boasts over 600 castles. Unfortunately, not all can be visited as they are occupied by their owners. I am, however, going to tell you about a few of them, that can be visited and this by linguistic region. Let’s not forget that the Swiss have four national languages and this is what brings about the four distinguishable cultures. You’ll also find a page, dedicated to this subject, on my website. 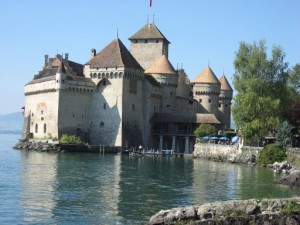 The Chillon Castle, on Lake Leman is certainly one of the most well-known of Switzerland’s castles and that, mostly in the literary world. During my visits to this castle, I have often heard and been told “I feel like I’m in a fairytale”. This castle was built slightly overlapping into the lake. It dates back to the Middle-Ages and is composed of 25 different buildings, of all shapes and sizes.

I highly recommend a guided tour of this castle, if you’re travelling in a group. The tours are given in different languages, French, German, English, Spanish, Italian, Japanese, Chinese, Korean and Russian. The visits last about 45 minutes. Should you opt for a non-guided tour, you can still visit with the help of notice-boards, in different languages, posted all the way around the castle. They will explain everything and guide you systematically around the castle. This is particularly interesting for individual visits.

Allow yourself to go back in time, back to the Middle-Ages, back to the time of dungeons. Visit Chillon’s dungeon because this is the very place where François Bonivard was imprisoned for 4 long years. Lord Byron’s famous poem, “The Prisoner of Chillon” speaks of him. 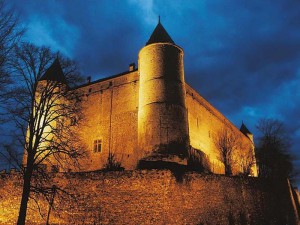 The Grandson castle is situated on the Lake of Neuchâtel. This medieval fortress was built between the 11th and 14th century and is of great national and historical importance within the group of Switzerland’s castles.

Grandson castle offers permanent public expositions of the arms, ancient armour, artillery and miniature battle scenes that are found within the castle walls.

This regional museum even boasts of a vintage car museum, named Old-timer. You will find Greta Garbo’s famous white Rolls Royce as well as Winston Churchill’s car! This castle, on Lake Neuchâtel, is easily accessible, either by train, by car or even by boat from Yverdon-les-Bains.

A slideshow of 20 minutes (in French, German or English) tells the story and traces the past of the castle, from the Middle-Ages, within the European context, even passing through the famous Battle of Grandson, that Charles-le-Téméraire lost to the Confederates, in 1476, through to their Modern Days.

Once at this particular location, I equally recommend a visit to the War Halls (Salle des Guerres), Knight’s Hall (Salle des Chevaliers) with the Renaissance stalls, Banquet Hall (Salle des Banquets), Torture chamber, Renaissance Room and the famous circular road, 150m long and then, not to be forgotten, at just 3min from the castle, a roman church, dating back to the 11th century 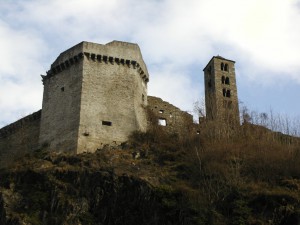 Castle of Mesocco, Castello di Mesocco (it sounds good in Italian) is other beautiful one of Switzerland’s Castles.

This castle’s ruins can be found and admired at approximately an hour north of Bellinzona. At the beginning of the Middle-Ages, this church/castle was built on this hill.

Traces show or rather suggest that this apparently, easily-defendable location was already populated in Pre-historical Times! This fortress was made up from a church dedicated to Saint Carpophore, a cemetery and a surrounding wall and was originally destined to serve as a refuge for the population in times of war.

Around the year 1000, this historical site was transformed into an entrenched castle and all through this particular century, the Saint-Carpophore church was, in its turn, restructured and transformed into a church tower. During the following centuries, the castle’s imposing image grew and a monumental dungeon (12th century) was built along with a reinforced confining wall, an abode (13th century) and many other infrastructures.

The adjoining buildings were completely occupied by the residing monarchy. This is how the original vocation of the castle, to serve as a refuge to the population, was slowly left aside. Unfortunately, in this present day, this castle is practically in ruins but is always and absolutely worth the detour should you find yourself in this marvellous region of Switzerland. 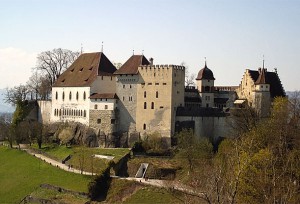 Schloss Lenzburg. This superb example of another of Switzerland’s Castles is situated at roughly 45min, by car, to the East of Zurich. A large number of visits are generally based on themes for children, for ex: “Fairies” and for the grown-ups there are themes such as “A day in the Middle-Ages” or “A guided tour for Dukes and Duchesses”. This castle overhangs the little town from which it derives its name, Lenzburg. The vast castle of Lenzburg is situated on a plateau on the summit of a rocky hill. The eastern half of this hill has a line of adjacent buildings, well-spaced out, tucked into the hill and the other half, the present-day garden, is surrounded by a wall.

The different corposants of this masterpiece of a castle date back to various époques. The southern-facing dungeons are considered to have belonged to the initial construction and were erected in the time of the Dukes of Lenzburg, as are the lodgements that lean against it and the Nordic Dungeon, just to the outer side of the castle. The Knight’s House and certain parts of the large entrance door, the construction erected by Rodolphe d’Aarbourg and named after him, certain parts of the building and within the confines, date back to the time of Berne’s reign.

The other constructions date to the Berne époque, these are transformations, the construction of new buildings, the housing located to the North and the posterior building, called the “Berne House”.

The Nordic dungeon of yesteryear is located to the east of the large door. Ever since the restructuring work undertaken between 1718 and 1720, the dungeon is joined to the adjacent buildings. At the time when it was isolated from the rest, it was overhung by numerous crenels. As for its ancient walls, on the Western facets, only a few sections remain and the bases of the Southern and Eastern facets are completely demolished.

The dungeon that was found on the southern side of the fortress had a very square plan and very thick walls. In 1728/29, during the restructuring, the tower was enclosed in an adjacent building, which required the demolition of its Northern façade all the way down to ground level.

Should you be travelling in a group, to this fine example of one of Switzerland’s Castles, and wish to have guided tours in English, for example, I would recommend that you make a reservation at least 2 weeks in advance. 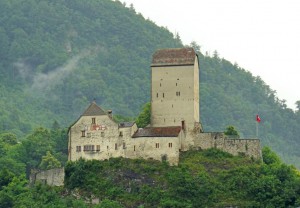 Sargans Castle. A visit to this magnificent castle will allow you to go back into the 13th century. The first time that this castle was documented, was in the year 1282, making it member of one of the “oldies” of Switzerland’s Castles.

In 1987, this castle, along with its museum, was mentioned as a must on the list of the 37 museums “to visit” in the world. Not as an old dusty museum but as a very informative visit allowing its visitors to relive the lives of the past dwellers, their costumes and work habits, as well as their region, known as “Sarganserland”.

The exposition is grouped into different themes, from the Middle-Ages through to recent history. You’ll discover this museum on six floors. Children are also most welcome. There is the possibility of seeing a wonderful and informative slide-show of high quality.

Should you enjoy gastronomy, you could have a meal at the restaurant in the castle. The House Speciality is “The Knight’s Menu” and of course, there is always the possibility of opting for a little lunch. In order to get to Sargans Castle by car, follow the notice boards all along the highway and you just need to exit at the sign indicating “Sargans” and then follow the arrows pointing the way to the castle.

By train and arriving at Sargans station, the castle is situated at approximately 15 min, by foot, from there. Follow the signs and arrows.

Should you be travelling in a group and you would like to have a guided tour, don’t forget to make your reservation at least two weeks in advance. 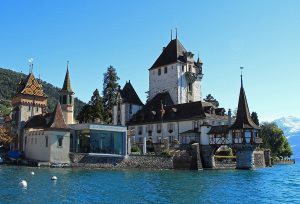 Another of Switzerland’s Castles is Schloss Oberhofen, Oberhofen Castle. This castle is situated on the lakeside of Thoune in the Berne region and personally, I find that the garden is of the most beautiful that I have seen.

This castle possesses the most important exposition of the culture of Berne habitation and this is equally part of the museum of Berne’s history. There is a large variety of interior decorating dating from the 16th through to the 19th century and you’re most welcome to come and admire the craftsmanship. This castle has paintings dating back to the Middle-Ages and as a result, is a real treasure. Equally real treasures, The Knight’s Hall, the Lake Turret, The Summer Hall, The New Gothic Dining Room and all with for magnificent backdrop, the majestically beautiful mountains of the Berne region. This location is easily accessible by leaving Thoune by bus and carrying on alongside, for about 15min, the lake. Reaching the castle is also possible by car or even by foot from Thoune. If you’re a hiker or like walking, it’s flat all the way and not at all tiring.

I really hope that during your visit to Switzerland, you will have planned it so that you will have visited at least one of Switzerland’s Castles. For your following visits, you will have 599 left to see so take advantage and I really recommend it, the experience is breathtaking and well worth the while.

Whether you’re interested in military history of yesteryear, architecture, ancient housing, antique furniture and culture, you will find for all tastes and interests.

Thank you for your attention. Now let this pretty girl guide you through Chillon!