The John Muir Trail, popularly known as the JMT is a 211-mile trip found in the Sierra Nevada Mountains. Most backpackers would agree that this trail provides some of the finest scenery in the US. It is a land of 14,000-foot peaks and land of 13,000 feet of thousands of lakes, granite cliffs, and canyons. It runs from Mount Whitney on the southern terminus and to the Yosemite Valley on the northern terminus.

The trail also coincides with the Pacific Crest Trail for more than 160 miles. It maintains an average elevation of 8,000 feet. The best time for hiking the trail is between July to September, when most of the snow has melted. If you opt to hike earlier in the season, you will have to carry an ice axe to cut through the ice, as you ford through streams filled with snowmelt. Most hikers prefer hiking from north to south, to acclimatize gradually. 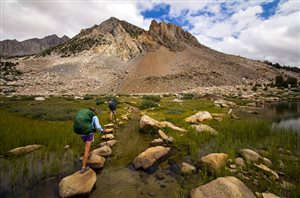 Apart from acclimatization, there are several resupply points on the northern section of this trail. This allows you to carry a lighter food pack during the start of the journey. The southern section of the trail is generally at a higher elevation and more remote. This makes it more appropriate to hike it during the second phase of the hike, after achieving maximum conditioning.

Trail conditions tend to be less demanding, if you hike later in the year. This is after the snowmelt has ended. September is the optimum hiking period. The weather is at its best during this month. During the hiking season, the weather is mainly dry and sunny. However, some thunderstorms in the afternoon can sometimes occur. The trail is commonly used by day hikers and backpackers. However, trail riders, pack trains, and runners also visit this trail. 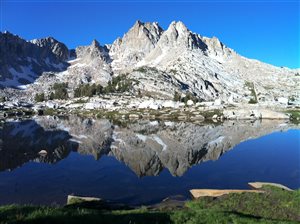 Hiking this trail requires a significant amount of planning. If you are a seasoned thru-hiker, then you should be able to cover the trail within three weeks, or longer. Even though the trail rarely crosses roads, there are numerous resupply points along the way. Considering that the southern terminus is at the peak of Mt. Whitney, you will have to add around 11 miles to arrive at the nearest trailhead.

Hiking this trail not only requires good hiking boots, but also permits. If you start at the north end, then you will have to place a request six months before your starting date. Permits can be obtained from Yosemite National Park. If you don’t mind, you can just walk-in and collect the permits yourself. However, you need to be at the station early enough, since the queues start forming as early as 9 am. This means that you will have to sleep within the vicinity of the station.

According to the United States Geological Survey, the official length of this trail is 210.4 miles, which translates to around 338.6 km. From its northern terminus, the trail goes northest, going through Half Dome and then proceeding to Toulomne meadows. From the meadows, the trail heads south, going parallel to the Sierra Nevada.

It passes through Yosemite National park, right through Inyo forest. It cuts across the Devils Postpile National Monument and finalizes on Mount Whitney. As earlier stated, an extra 11 miles will have to be added to reach the nearest trailhead. Therefore, an end-to-end traverse of this trail will cover around 221 miles. This is effectively 356 km. 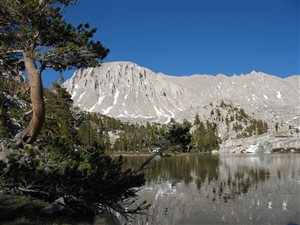 Beginning at the Happy Isle Bridge, the trail takes a steep ascent along a paved incline. It then crosses another bridge and meets with Mist Trail at a junction. The trail cuts through Panorama cliff. Although well travelled and broad, a large number of day hikers and hazardous winter conditions make this section one of the most dangerous on the entire trail.

After gaining the some elevation through some switchbacks, the trail heads to the top of the Nevada Falls. The trail proceeds to the Little Yosemite Valley, passing through Cloud’s Rest and into the subalpine basin. The JMT passes through the Cathedral Range before a loss of elevation at Tuolumne meadows. You can resupply at this point before proceeding with the hike. The trail then links up with the Pacific Crest Trail, before turning south. It passes through the Lyell Canyon meadow, crosses the Cathedral Range again, and finally at Donahue Pass, where it exits the park. 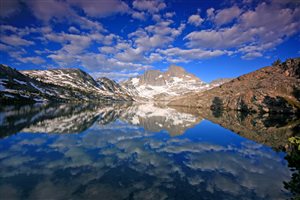 At Donahue Pass, the trail heads into Inyo National Forest. After Ansel Adams Wilderness, the trail goes along a series of lakes such as Garnet Lake and Thousand Island Lake. The trail enters Devils Postpile National Monument. This section offers another opportunity to exit and resupply the trail. You will find Devils Postpile a few meters from the trail.

The JMT then proceeds to Kings Canyon National Park. It then crosses some amazing alpine regions that include the Golden Staircase, the Evolution Basin, and Forester Pass. All these spots offer some nice opportunities where you can take photos to remember. The trail concludes at the peak of Mount Whitney, which is classified as the in the lower states of the US. 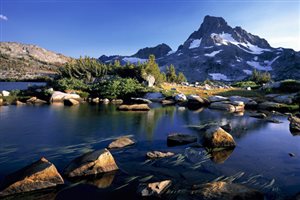 The lowest point on this trail is at Yosemite Valley on the northern terminus. This is around 4,000 feet. On the other hand, the highest point on this trail is at an elevation of 14,505 feet. This point is at Mount Whitney on the southern terminus. Excluding the initial seven miles after Yosemite Valley, the trail maintains an elevation of more than 7,000 feet. the trail goes through six mountain passes that are over 11,000 feet. Hiking from north south, you will come across Silver Pass, Donahue Pass, Mather Pass, Muir Pass, Selden Pass, Glen Pass, Pinchot Pass, And Forester Pass. Forester Pass also marks the highest point on the Pacific Crest Trail.

Similar to other long distance hiking trails, this trail is very common with thru-hikers.The JMT is regarded by many as the premier hiking trail in the US. It travels for more than 215 miles, cutting through forests, wilderness, creeks, and other amazing scenery. Considering that there is so much to enjoy, you don’t need to rush. Like every adventure worth the time, you need careful planning. Ensure you have the right itinerary in place.

High Sierra – A Journey On The John Muir Trail