Popularly known as the Roper Route, the Sierra High Route (SHR) is a hiking route 314 km long passing through the Sierra Nevada, thus the name. The route passes through two wilderness areas, Ansel Adams and John Muir and two national parks, Yosemite and Sequoia-Kings Canyon. It is similar to the John Muir Trail (JMT) but more rugged with over a hundred miles of boulder fields, class III scrambles, and cross-country travel.

More than a third of the route follows existing hiking trails the JMT. The rest of the route goes through granite slabs, off-trail meadowlands, and loose-talus terrain. You don’t require special mountaineering skills to hike the route. However, you might encounter class-3 rock faces that require careful choosing and testing of handholds and footholds. 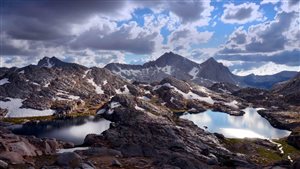 The southern terminus of this route can be found towards the south fork of the nearby Kings River and about 100 miles east of Fresno. It ascends into the high sections through the Copper Creek Trail. The Northern terminus can be found at Twin Lakes, Mono Village.

If you do not intend to hike the entire trail, you can do it in sections. However, since vehicle access is somehow limited and the track is so remote, it can be logistically difficult. What makes hiking in sections even harder is the fact that you will have to hike for long distances from the trailheads nearby before you can reach the Sierra High Route. In that case, you can integrate portions of the route into loop hikes. 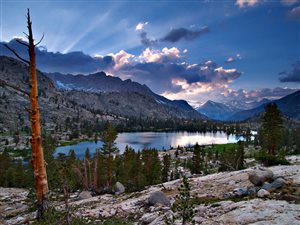 The JMT and the SHR cover almost the same distance of around 200 miles. They both follow the north-south corridor as they pass through the High Sierra. On top of that, the SHR uses around 40 miles of the John Muir Trail. Despite that, they provide different experiences and trails.

First of all, the SHR is a route, not an official track. There are no signs on the ground and it is not marked on a map. In fact, it is known by very few people and very few have managed to hike it in its entirety. The footpath is not continuous considering that more than half of its course is off-trail. On the other hand, the JMT is an official course. There are several markings and signage on the ground and it is clearly labelled on several maps. It is a continuous footpath known and hiked by many people.

Considering the track is not so popular and known, only 10 hikers on average manage to hike through the SHR every year. They may be less or more, but the number remains significantly low. Similar to other long-distance trails, most of the traffic comes from section hikers who prefer using the sections of the route that are most accessible.

The Best Time to Hike 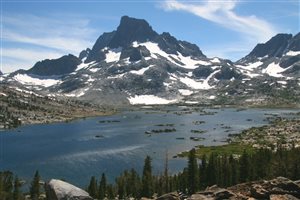 The best time to hike go hiking at the SHR will ultimately depend on your preferences, hiking skills, hiking footwear (women’s page) plus the time of the year. The place is not suitable for hiking from November to May, unless you are a very experienced mountaineer.

Early season hikers will face more wet feet, more snow, and more mosquitoes, which are very prevalent in the months of June and July than later on. If you intend to hike during august and December, you are going to experience few mosquitoes and drier conditions. However, during this period, there will be more exposure on the scree fields and the melted mountains will not appear as majestic as earlier on.

If you go hiking at the SHR in October, you will face the fewest bugs, the coldest temperatures, and the driest conditions. Therefore, you should choose a period with favourable weather conditions depending on your skills. 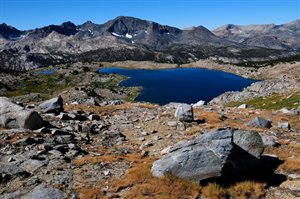 You will require a wilderness permit if you start hiking the SHR at the terminus. Several agencies manage the High Sierra. However, you will only need to secure a single permit from body managing the trailhead you will be starting out.

If you commence from Roads End, you should get the permit from Sequoia-Kings Canyon NP. If you have already planned your trip and you know the exact starting date, then you should secure your permit well ahead of time. This will minimize any delays or issues that might emerge afterwards.

You will also require a wilderness permit for all overnights spent in the backcountry. If you intend to pass through the JMT and the Ansel Adams areas, you should obtain a free permit from Inyo National Forest.

The best gear for hiking the SHR entirely depends on your skills and experiences, the season and your preferences. However, try to travel as light as possible. The weight of your backpack, not considering consumables should be around 15lbs or even less. 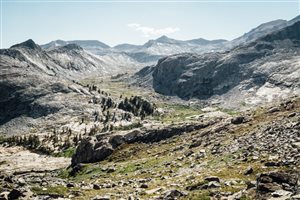 There are several reasons why you should travel light on the SHR. First, the route consists many big climbs, steep passes, exposure to thunderstorms and expansive boulder fields. With a lightweight pack, you will be able to reduce the strain and stress on your body and at the same time improving mobility. In that way, you will be able to minimize injuries and wear.

Secondly, there are very few points along the SHR where you can resupply. This means that you will have to bring a lot of food with you. This translates to additional weight. If you are carrying lots of food and then add your heavy pack, you will find it very uncomfortable. If you can reduce your base weight, you can quickly cover more ground, thus reaching the resupply points quickly.

The SHR passes through some very remote areas that are not suitable for easy self-extraction or search and rescue missions. You are more likely to suffer from overuse and acute injuries with a heavier pack, which makes it even more dangerous for your livelihood. In order to travel safely and navigate efficiently across the SHR, a high-level mental engagement is need. You will be increasing mental fatigue with a heavier pack, which will make these tasks very difficult.

The direction you follow at the SHR is not important, unless you intend to hike late or early in the season. If you go early, then you should go north since the southern sections generally receive less snow. If you go late in the season, you should travel south. Snow is most likely to reach the northern sections first. If you are not hiking early or late, then you can choose any direction.